Twelve-month results from the MAJESTIC trial evaluating the performance of the Eluvia drug-eluting stent demonstrated a primary patency rate of 100% amongst diabetic patients and no target lesion revascularisations in this subgroup. 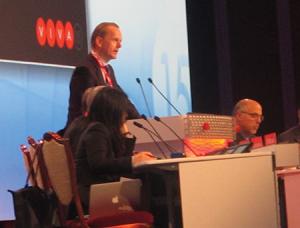 The Eluvia stent is composed of the Innova self-expand­ing nitinol stent platform (Boston Scientific) and a dual layer coating—the first layer aims to promote adhesion of active layer to stent, and the active layer (paclitaxel, PVDF-HFP) controls release of paclitaxel and provides sustained release of the drug over time.

The results showed that the primary patency rate at 12 months was 96.1% (49/51), and on a Kaplan-Meier estimate it was 96.4%. The major adverse events rate through 12 months was 3.8% (2/53), with two cases of target lesion revascularisation. No stent frac­tures were identified at 12 months upon analysis by the angiographic core lab. In terms of patient outcomes, 94% of patients experienced improvement in symptoms and were classified as Rutherford class 0–1 and ankle-brachial index improvement sustained through 12 months.

The investigators also analysed the subgroup of diabetic patients (n=20). In diabetics, the mean lesion length was 77.7±20.4mm, severe calcification was present in 75% of cases, and 75% of the lesions were located distally. Ten per cent of patients had no infrapopliteal vessel patent, and 35% had only one vessel patent. “I was astonished when I noticed the medical history of these patients as 90% had history of smoking, 85% suffered from hyperlipidaemia and 85% had hypertension,” he said.

Amongst diabetics, the primary patency was 100% (14/14) and there were no target lesion revascularisations or other major adverse events in this subgroup.

Müller-Hülsbeck concluded by reminding the audience of the 96.1% primary patency rate achieved at 12 months for the overall population of the study, with only two cases of reintervention and no stent fractures. He added that the study demonstrated high patency and “excellent” safety profile in the challenging subgroup of diabetic patients. “Patients exhibited symptomatic and haemodynamic improvement through 12 months. Eluvia’s paclitaxel/polymer combination may provide a long-term benefit over the bare metal platform.”

One of the panellists, Market Burket asked Müller-Hülsbeck whether the benefit of a slow release of paclitaxel was something that should be rethought. Müller-Hülsbeck answered, “It is of utmost importance to think of a slow and sustained release of paclitaxel as we need to look for a controlled endothelialisation. With the combination of polymer and paclitaxel, we have a high burst release, which is needed after you have injured the artery with predilatation and implant. And I am convinced that we need sustained release over time for controlled endothelialisation. The design of Eluvia controls the release over 12 months and sometimes over 15 months.”